I set the case down next to the sink. No, it might get wet. I thought. I picked it up and put the strap on my shoulder, so the prized possession was resting on my back, safe from water. A woman walked by behind me in the public bathroom and knocked my purse, which knocked the case, pulling the strap from my shoulder as gravity pulled the valuable toward the ground. With Elasto-girl’s flexibility and Jack-Jack’s incredible speed, my hand moved swiftly to grab the strap to avoid the camera hitting, while my purse finished the descent to the dirty floor. Fortunately, it was only my purse and not the camera!

I need to shorten this camera strap, I thought, so it doesn’t fall off again. But wait, it is not mine, so I don’t want to adjust anything in case the owner likes it at that exact length.

I continued babying the camera for the three hours it was in my possession.

My 12-year-old daughter was in a talent competition, Actors, Models and Talent for Christ, and wanted an actual camera as a prop in one of her acting scenes. We borrowed one from a grandparent of another performer.

I was so nervous to hold the camera. I didn’t want anything to happen to it before it could be used for its purpose in the acting competition. Besides, I pretty much hate borrowing anything…almost ever…because I am afraid I will mess something up.  It is as though my pride can’t handle being the one to hurt something that is not mine.

I wish I treated my life as if it were Someone else’s!

To Whom Does This Belong?

How do I keep forgetting Whose life this is?

My pastor, Stephen Davey of Wisdom for the Heart,  did an illustration not long ago. He brought a man to the front of the church and asked him to give him his wallet. The man did. The pastor then took $20 out of the wallet and handed the man his wallet back – $20 short. The man said, “Thank you.” As we all would expect when someone gives you something back – even though:

His example was an illustration of tithing – how God gives us “a wallet of money” and we give a portion back (sometimes only 10%!), and then act like God should say “thank you,” when really it was 100% His to begin with!

I liked the illustration, and for me, I applied it to my “wallet of time.” I have 24 hours in a 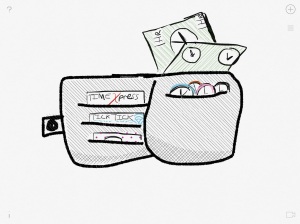 day that God has given me. I am embarrassed to say that sometimes I act like He should say “thank you” if I give “some” of it back, while I try to keep the rest of the time “for me”.

The fact is that all of the hours were His and still are. It is up to me to represent them that way.

I guess I need to treat this life like the camera next to the sink – as a precious possession of Someone else’s- and protect every inch of it, so it is ready to be used when the time of its purpose arrives.

If I recalled Whose life this is, would I guard my brain’s intake more wisely? (Phil 4:8)  Would I use words purposefully (1Thess 5:11)? Would I rest more, eat better, and in general beat my body into submission to what I should be doing? (1Cor 9:27)

What if I took care of all of my possessions – as if they are gifts for His use and not mine? (because they are.) (1Chron 29:14)  What if I used my life as the gift He loaned….and used it for His purposes alone?

In reality, there is no-such thing as a compartmentalized Christian.

“Either you live your life for God’s glory, or you are living for yourself. There is no ground in-between.” – Chris Brady

May God keep us focused on living for His glory…with every hour He graciously puts in our “wallet”,

An engineer in a former life, Terri now enjoys engineering a home with 4 kids, a puppy, and her #1 fan, Rascal author, Chris Brady. Although a leadership speaker and business owner, "Mom" is her favorite title, and she can usually be found cheering on the sidelines of a soccer field. She has an insatiable love for music, is solar powered, and can be influenced by coffee and chocolate. She seeks most to glorify God and enjoy Him forever.