The seeds had been planted 5 years earlier, but they didn’t actually begin to sprout until one day when I took a walk to the park.  I was married with one child. After walking my then one-yr-old to the park on a Thursday morning, I found teenagers playing on the playset. Disappointed that these “truant hooligans” were using the equipment for tag, I turned my stroller around to head home, since running teens would not make a safe environment for my newly walking one-year-old.

That is when one of the teens yelled, “Hey everybody! Get off of the playground equipment! There’s a baby here to play!”

I had somehow become accustomed to rude teenagers at this park, who were too often self-centered, (and likely skipping school). I couldn’t believe my ears! One of the girls came over, confidently looked me in the eyes with a smile and said, “Here, you can have the playset; we will go over to the woods to continue our game.”

“What planet are you from?” I asked.

OK, not really, but I could have asked that, because I was that surprised by their respectful behavior toward my son and me. Not one of them was wearing something I would not wear – nor wearing something I would be embarrassed for her to wear if she sat next to my husband on a plane.  I realized they might make good babysitters, so I asked them for their phone numbers. They excitedly gave me their names, when I realized I WAS ASKING COMPLETE STRANGERS TO BABYSIT MY KID!

I decided I needed references – which is when I asked which school they attended and found out they were homeschooled. For the first time, I thought, “These homeschoolers are different, and if this is the fruit of the homeschool tree, maybe I should stop judging them and investigate how those roots began!”

It is sad, but my first look at almost any change is always a negative look, with my mind locked shut.

The family almost whispered about those cousins, as if they agreed on my “bizarre” label. My judging response was in the form of questions that I didn’t have the courage to ask – because I wasn’t seeking answers, only judging:

But seeds were planted, and they grew in God’s timing – which happened to be five years later– when I took the walk to the park.

Fast forward from my park story two years, and I had a three-year-old and a baby.

My neighbor two doors down in that park’s neighborhood also had a three-year-old within a couple months of Casey’s age. She and I were very different. While my husband and I worked on beginning a business of striving for excellence in life and attended church regularly, she and her husband headed in a different direction. I devoured Dr. Dobson’s parenting books, chose to avoid allowing our children to watch TV or movies, and strived to improve myself with the same disciplines.  She had favorite soap operas, used R-rated language in normal conversation with her children or me, and often referred to her husband as the #@#$#%#$ bleep who wouldn’t clean the toilet! The f-word was her favorite descriptor; her husband was considered her servant and her children her burden to bear if they ever stepped away from the television. I will never forget the chill that ran down my back the day she excitedly told me, “Our boys will be able to walk to school together!”

I have heard that we are a product of the books we read, the words we hear and the people with whom we associate. I suddenly realized that although as an adult I can choose my books, CD’s and surrounding people, my some-day-5-year-old, would not have that option. He would be a product of his zipcode that determined which school he would attend.

During this same time, a good friend of mine innocently shared a story of her 1st grader.

She had gone to school to help with the class, and took pity on her son’s classmate, a 6-yr-old who was working through his lettering book. While the rest of the class used the “writing station time” to go through one letter at a time and had mostly progressed to the “R-S-T-U-V” stage, this little guy was still on the “D-E-F-G” pages. She knelt down and helped him, while he got more and more frustrated. The teacher ran over to my friend and told her to stop helping the boy. The teacher then turned to the almost tearful boy and gave him a verbal lashing for being so slow and behind the class, and he “would surely be doing letters in summer school if he didn’t pick up his pace!” My friend was upset, seeing the damage the teacher’s words could do to the boy, but not sure what to do about the situation. Obviously, there may have been much behavioral history with that child in that class, but the teacher’s lashing threats didn’t seem likely to inspire improvement. Besides, there were twenty-five other students that needed the teacher’s attention; she certainly didn’t have time to cater to every rabbit and snail, so she was choosing. I may have done the same if I were a teacher of twenty-five 6-yr-olds!

It was around this time that it dawned on me: If I were hiring someone to watch over my children 30 hours/week, it would not be a light decision. I would be interested in the person’s love for children, patience and understanding during challenges, religious stand, interest in flying planes into buildings and the many other rights and wrongs which people in our country coexist in disagreement. I believe we should take the same approach to “hiring” someone to be with our children (plus 20-30 others in the classroom) for thirty hours a week. Even if MANY kindergarten teachers could teach my children better than I, have more patience, more experience and more creativity than I, NOT ONE could love my child more than I, and therefore, we chose to homeschool…at least for a while.

Define what you want;  Learn from somebody who has it; and Do what they have done.

I hunted down the mother of those teens from the park two years prior. I was sure she thought I was crazy, (Since my oldest child was three, I was hardly putting him in school!) but I liked the fruit shown in her girls that day, and I wanted my children to display it. I wrote down a list of questions, and invited this otherwise stranger to lunch so I could grill her on them. I saved the list – and recently came across it. (The list and her answers are attached at the bottom of this letter.)

As with major decisions, we prayed while we listed the pros and cons of each schooling scenario, and then made the decision that was best for the Brady family. My goal with this week’s Letters on homeschooling is not to make my decision be your decision, but to encourage you to strive for excellence even in the education of your children. I am embarrassed to say that there was a time when I didn’t believe that my children’s education fell within my responsibility. “Isn’t that part of paying taxes?” Now I think differently.

I have been very impressed with the homeschoolers I have met, and would love them to influence my children. When I hear, “Mom, can you wake me up at 6am tomorrow, so I can read before school?” from my daughter, or “I am selling my ski-boat that I bought when I was 13 with money from the business I started,” (selling CD’s of his piano playing) from a young man at church, I recognize fruit on a homeschooling tree. Homeschoolers do not go without criticism, though; I have met many that are too shy, some that seem non-perseverant, and a friend this week told me she knew a family of them that was “rude, just rude!” But in my humble experience, the odds are that the fruit is the kind of sweet that I want to experience in my home.

I am sure that God will continue to write a testimony for each of us. I am including links below of news articles in the past few weeks alone that continue to keep me happy to be a homeschooling mom. 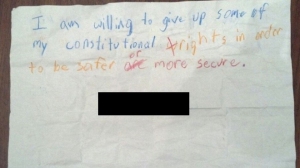 give up some of my constitutional rights in order to be safer or more secure.” READ MORE.

May 2, 2013: “’Can I kiss you?’ That’s what middle school girls were told to ask one another during an anti-bullying lesson at Linden Avenue Middle School in Red Hook, NY.” READ MORE.

January 23, 2013: “Common Core” is Obama’s “War on Academic Standards.” Accepted in 45 states, it will dumb our country down, one student at a time. “It doesn’t start with the ‘low-information voter.’ It starts with the no-knowledge student.” READ MORE 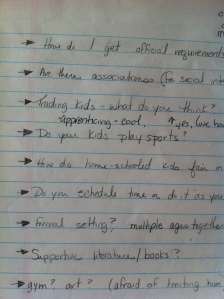 My original questions of the “stranger” homeschool mom from the park: (Her answers in her words are in red. On a future Letter, I plan to include more FAQ’s with my own answers as supplements.)

Another wise mom, Sue Gray, taught me her principles for homeschool:

A – Acknowledge where strength comes from.

C – Conform to Christ not culture.

E – Endure all things because Christ did first.

19 thoughts on “It Began as a Walk in the Park”