No orphans of God.

I am still in Guatemala. The heart-wrenching is good for the soul.  I haven’t had time to write every day, but I thought I would try to synopsize a bit so you can get the idea.  Feel free to skip to the “Thoughts to Ponder” if your time is too limited for reading my diary :).

Dorie’s Promise, the privately owned orphanage on the property where we are staying, has 38 children right now.   That seems like a lot: to grow up with 37 siblings. 38 people at the dinner table. 38 people’s worth of laundry, food, sickness, chaos, etc. It breaks my heart that they don’t have a mom they can “go home to” and tell the story of their day.

Yet, I realized what a difference Dorie’s Promise is making in those 38 lives, when we went to the state-run orphanage, which has up to 1000 children under the age of 18. We focused on those most ignored:  sixty with special needs and twenty young mothers (age 13-17), who had been raped and left or abused, so they were brought to the orphanage by police.

We brought cake and activities. Smiles and hugs. We tried not to notice lice or deformed

faces, not to think of how the baby’s arm was broken or how the mentally retarded girl now has a baby.  I tried not to flinch, when grabbed from behind, as they reached out only to be touched. Give me Your eyes today, Jesus. May I see them as Your children and lift them to see themselves that way.

One young retarded boy helped another in a wheelchair by taking his plate to the trash. He licked the other one’s plate as he walked, and I realized what a gift the cake must have been.  A young mother needing dialysis three times/week is about to be back on the street since her 18th birthday is approaching. So much “out of my control,” it’s hard to think about.

We woke to treat the “special mothers” (women who work long shifts here and love the children of Dorie’s Promise more than just a job) to a breakfast and devotion in our house, while we went next door to take care of the orphans. I

LOVED reading a book aloud to the children (I’m sure my gringo accent was half of the amusement.), and they came running to fight for lap space as soon as I sat with the libro.  Painting nails, making beaded necklaces, coloring and finger painting were special activities for all. The other amusement was my camera that takes videos. “Por favor foto?” they would ask, and pose with different combinations of children to vie for the spotlight. This cutie, Hilary, surprised me with her belly dancing. Aaah!! Easy to love the lovable! Nayeli had a different interpretation of dance, but both RAN to see what I had filmed. 🙂

After the morning with Dorie’s kids, we headed to the city dump, a large area where another ghetto community has been built. The repelling stench increased our desire to stay on the bus, but our team, favorably greeted by residents, forced ourselves through the trash-sorting area to get to the community of 150 homes made of cardboard, cinder blocks and tin. Approximately 3 families per home lived in this community full of roaming children and dogs. The dirt paths were speckled with color, reminding me that we were standing…ie, they were living… on a mountain of trash. I could see the bottom of a Croc surfacing.  I pray the people don’t associate themselves with the trash beneath but with the God above.

Toddlers and babies everywhere made me see the burden of fertility and I was beginning to forget the blessing.  An old man, weathered as much from the sun as from the years, suddenly leaned down to kiss a baby who lay unattended, near where I stood. As the baby received the kiss, both the great-grandpa and the baby instantly yielded smiles, as if the weight of the world were lifted. “My great-grand-daughter!” he announced to me, proudly pointing to the baby’s married 16-yr-old mother beside him.  I felt like I had received a post-it note from God: “I am still here. Don’t grow weary.”

Part of the $975 cost to attend this trip with Forever Changed, included buying things to supply some needs of this area.  At the dump, the money was used for “pilas”. A pila is a 500-pound cement sink basin, which seemed like an odd request if they are not washing dishes.  However, a pila, to them, means income, because they can use the water to clean things that have been “dumped” there, and then sell the cleaned treasures on the streets.  As we delivered our gifts, I realized we were trying to live out the philosophy taught in the book, When Giving Hurts, so that we don’t hinder people by our gifts.

At our own devotional time this morning, Joel told us that Dorie’s Promise was so 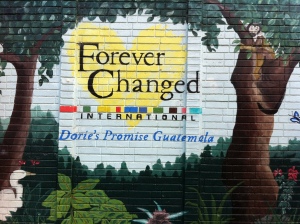 Mural on the play-yard wall.

named because an orphan, Dorie, who had been abused and moved from home to home, had been given a Bible and the words, “Jesus loves you,” by a missionary. She had hung to those words and The Word through much abuse afterward, but eventually devoted her life to giving back and helping orphans. Such a small seed was planted, and although the missionary never saw the fruit, God did, and still is.

After devotions, we went back to the ghetto today – the one we had visited Sunday.  This time we carried twenty water filter systems. (They look like 20-gal Britta filters.) One woman wept when she walked into the room and saw the filters, before we gringos even began to speak.  The woman from our team whose 10-yr-old daughter had raised the money for the filters (selling hair clips) also wept, while the recipients expressed their gratitude. It was as much of a blessing to give as to receive.

1. United States is rich. I once heard that people on welfare in the U.S. have a higher average income than 85% of the world. In essence, Americans are all rich in comparison. I used to be judgmental of rich people, assuming they were materialistic and loving money more than God.  “Good people do good things

with money,” my husband fought back when I tried to squelch his ambition to start a money-making business over a decade ago. “If good people don’t use their God-given ambitions, who will be there to help when a need arises?” he had asked me. No one on this missions team is unambitious: Surgeons’ wives, business owners, nurses and CEO wives were blessed by God to be able to help in time of need. I am so thankful for them!

2.  “What if it’s a scam?!” “What if your money doesn’t really go to helping anyone?” “What if the people are pretending to be poor, taking off their shoes when you arrive, just so you will give them more?” “What if they take your gifts and destroy them the next week, since they didn’t earn them and don’t appreciate them.”

People who have been here don’t ask those questions.

3.  I think a definition of “hell” for me would be to be surrounded by people with needs that I cannot meet. Hungry children. A teen with kidney failure. A diabetic grandfather who lives at the dump. A 60-yr-old woman who tumbled down the concrete stairs of the ghetto last week. A 5-yr-old with a tumor on his eye. Those have been the low points of this week. Yet, how prideful I am! To think that I am the only one who can help?! That I have control over whether needs are met?!  My pastor said it well:  “It’s not, ‘I do my best and let God do the rest.’ That’s wrong.” (I myself have been guilty of saying that!) “The real statement,” he said, “is ‘God does it all. Period.’”

I am thankful that I do not have to carry all the weight on my shoulders. God has this. Every day of these people’s lives has been made by Him to make them who they need to be.  Maybe one of them will be the next Dorie.  I just want to be quiet enough they hear His voice. As our director, Joel, says, “I want to disappear, and let God be seen.”

One little stone changed two nations forever.  (1 Sam 17 – David and Goliath) That was our devotion one day this week. What little stone could you be throwing with God’s might behind it?! Today, Joel said in his broken English as he ended our devotion time: “You know those people who say they are going to change the world? And everyone thinks they are crazy? They are doing it.”

“God doesn’t respond to our needs, He responds to our Faith.” –Joe DarkAngelo

May the people of Guatemala have faith in Him.

18 thoughts on “No Orphans of God”