This week in Guatemala has been blessed with friendships, new and old. Susie 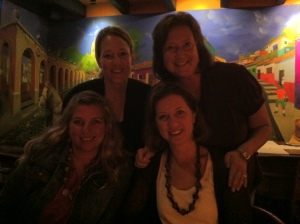 Jen, Tracey, Susie and I at final night dinner out

Hallstrand and Tracey Avereyn have been friends of mine for the best parts of a couple of decades. Susie’s nursing knowledge combined with her ability to always see the needs of others –team members or strangers – was irreplaceable. Tracey chose to read to the three special needs children of Dorie’s promise instead of playing outside with the children daily, yet her fruits of the Spirit were also evident in her gentle reaction when a child accidentally pressed, “delete all,” on her camera.  My friend, Jen Korte, (who invited us to go on this trip since she has been here many times), and I have a friendship that makes up in depth what it lacks in years, as God gave me a soul sister on the soccer sidelines. But here in Guatemala, I feel like I have met the “real Jen,”: the Jen that has an insatiable desire to help others in need, in the name of Christ.

Each morning, our team would meet with the FCI Missions director, Joel Juarez, who would go over a devotion, which kept us focused on our purpose, when the pain of surroundings tried to distract. In the evenings, we would meet again and each member would state a high and low of the day: the returned smile from an apprehensive toddler, the reciprocated English “God bless you!” of the teen, the boy who said, “I have only had the bones, but I wonder what the chicken tastes like,” and more.  The quality of the hearts of the people in the room was astounding. Two team-members, Sue and Kari, even brought their children (Belen -5 and Wilmer -10) with them whom they had adopted from Dorie’s before international adoptions closed.  They, along with Jen, returned with a promise not to leave the others behind, and spent their week sorting through hundreds of pounds of donations they had stuffed into extra luggage. Liz’s heart was on her sleeve and kept our eyes “leaking” love; Kate’s smile lit the room when she spoke of her daughter’s fundraising; David and Bin said they were nervous around children, but that never showed, and they’ll be fantastic parents to the baby they are expecting through adoption from Korea within a year; Nate was seeking a way to serve and found the group solely by internet searching, but it was hard to catch him without a baby in his hands!; Sheryl could be a stand-up comedian with her Jersey humor and kept me taking notes so I could laugh again later;  (We nick-named her “Jersey”, and because she kept adding “ario” to words to try to sound Spanish, we later called her “Jerseyario”.)  Diane showed such leadership with the kids – they would follow her anywhere, but her true strength showed when she served through a migraine yesterday. Tracy (different from Tracey) and her daughter, Alex (10), were blessings of peace under fire.  The team made the perfect parts of the body of Christ to serve together on this trip.

With such great teammates, I wanted to capture more than just my own thoughts of the week, so I invited them to write for my blog. Tracey took me up on it (below), and I am hoping some of the others will attach comments to bless us all.

In the words of Tracey Avereyn:

When the invite to go on a mission trip to Guatemala appeared in my life, 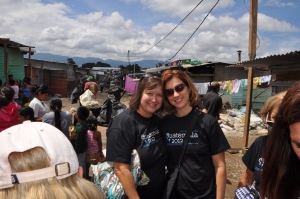 Tracey and I in front of “the dump” community entrance

my enthusiasm for the idea grew from a couple of seeds.  The first was the opportunity to go and make a difference…to be active hands and feet of the Lord Jesus Christ as instructed in Scripture.  The second was much more selfish.  I know people who had returned from similar trips and had shared how blessed they had been through the experience…blessings from learning the stories of others, travelling to other countries, gaining perspective and developing (or even fine tuning) a scale against which to audit myself in such areas as character and faith.  And I wanted that.

And now our trip with Forever Changed International and the Dorie’s Promise Orphanage is beginning to wind down.  And this is where the rubber meets the road.  What will I do with what I’ve learned…what I’ve seen?  How will I be different going forward?  What will I be doing differently in the days to come?  And, I can honestly say that I don’t have all of that figured out quite yet.  But I know one thing…I will give thanks to God, because the one thought that continued to rest on my mind is, “There but for the grace of God, go I.”

This week I’ve met families who live in homes that would fit within the bedroom walls of my 7-year-old.  “There but for the grace of God, go I.”

I looked into the sad eyes of 14 year old teen mothers…placed into this situation primarily by abuse…abandoned by family…living in a government-operated orphanage.  I considered my own 12 and 14 year old daughters.  “There but for the grace of God, go I.”

distributed among the residents of a shantytown community situated on the edge of the dump.  These people make their living among the vultures that oversee this chasm in the city rummaging for items discarded by another that they can sell in order to feed their families.  A luxury item in this place is a concrete floor…a roof that doesn’t leak.  “There but for the grace of God, go I.”

Water filters on our bus

We had the pleasure and privilege of delivering 20 portable water filters to a ghetto community that is built along the steep face of a cliff.  The joy evident in the faces of the ladies who received these apparatuses would light the night.  I’m sure they were considering the time saved now that they didn’t have to boil their drinking and cooking water.  Yet, I felt inconvenienced with washing dishes with water that I didn’t have to boil, while waiting for a new dishwasher.  “There but for the grace of God, go I.”

In his first letter to the Thessalonians (1 Thess 5:16-17), the Apostle Paul instructs us to “Be joyful always; pray continually; give thanks in all circumstances”. And, if I were to be honest with myself, and you too, I must confess that I fail miserably at this charge.  And, this week, I repeatedly met people in much more dire circumstances than I have ever found myself…doing just as Paul instructs.  These people had no

say regarding what country and situation they were born into…just as I had no say, yet received the unearned mercy of being born in the United States to a loving family with a committed mother and father. Yet, as we launched into communities in such places as a Guatemala City ghetto or a shantytown set up along the edge of the dump…we repeatedly were experiencing these people giving back to us.  Serving us cups of Coca Cola…praying God’s blessing for us…and assisting us with our various tasks.  I have so much to learn from them.

Anytime I am leaving a beautiful vacation spot, usually along a beach of one of the Great Lakes, I am always a little frustrated that that beauty is always there whether it is being enjoyed or not.  This week, as we came 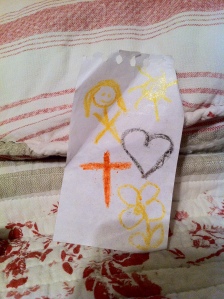 and went to these places, returning to our comfortable resting spot, it occurred to me that those places of struggle continue to exist whether someone is there to help or not.  There is no escape for those residents.  And as I return to my wonderful country…to the cocoon of my family and friends…I need to give thanks to an almighty Creator because “There but the grace of God, go I”.            – Tracey A.

When we are irritated by that slow driver, frustrated with the boss who lacks people skills, judgmental of someone’s response to us in life, may we give thanks to God in all things and humbly recognize that there, but for the grace of God, we go.

And when we feel a tug on our heart of a need to be met, may we, by the grace of God, GO.

14 thoughts on “But For the Grace of God”