I got off to a start this morning. My oldest drove himself to school. The next three kids and I loaded into the car before Chris was even downstairs for breakfast. Off to the appointments we headed when I got a text from Chris that changed my day:

“Why is there a dead bird on the air hockey table?” 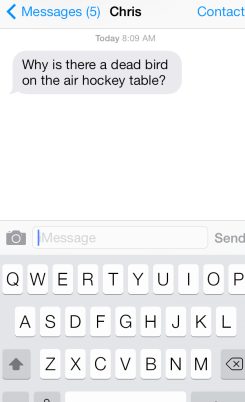 Stopped at a red light, I read the text aloud to the kids in the car, sure that my backseat held the culprits.

Suddenly, the 13-yr-old in the front seat was stifling giggles that refused their restraint and started sneaking through his pursed lips in bursts.

Shocked, and trying to be strict, I subdued the humor of the text – but my own choked laughter (holding up my cup to hide my smile) led to the coffee-down-the-wrong-pipe-choke, so I prayed the light would stay red for a while as I tried to get oxygen.

That’s when the back seat spoke with remorse:

“We felt bad it died yesterday in the back yard, and we were going to bury it…”

“…then Nate asked if I would throw football…”

“…and I didn’t want to have a funeral without people…”

“…and then we left for evening church in a hurry…”

At eight and ten-years-old, their voices are undistinguishable, so I couldn’t tell which

one was talking when (and I was seriously just trying to breathe again), but I got the gist of their story. I only wish that Chris had not been the first to find the carcass: a messy house drives him crazy! Although I can’t think of too many people that are happy when they find a dead bird on the air hockey table.

They are not getting this “pick up after yourself” thing that I have been teaching since before they were born!

Oh my…I cannot put into words to even speak to these two right now. They know what they did was wrong!

That’s when my thoughts of frustration were interrupted by a protective (or perspective) mechanism:

I think it’s ironic… I was trying not to get too bent out of shape, so I made a list in my mind of what to be thankful for (my normal redirection mechanism), and I ended up being thankful for the exact thing I was trying to reframe: the dead bird on the air hockey table.

I think the point here is that this mechanism is applicable to bigger issues than dead birds on the air hockey table. When I go through bad times (This began during my years of massive headaches while I had young toddlers!), I have a protective mechanism of listing things (at least three each time!) for which I am thankful. It is ironic to me the number of times when I am listing thankfulness to distract me from a problem – and give me perspective – that the list goes all the way back to thanking God for the exact problem with which I started: the dead bird on the air hockey table.

I suppose one of these days, I will be able to skip the “Why?…” part and get to the “Thank You, God for even this,” faster.

A friend, Jane Zempel, spoke at my church recently about “contentment.” She told a story of figuring out what one thing is so bad in life that you would want God to change. What one thing would you get rid of? If you were granted only one thing about yourself you could change, what would it be?

“Now thank God for that one thing,” she said.  “It’s amazing how when I did this, I had to force the words ‘thank You,’ but once they were said, enough times, I realized I could believe it.”

She went on to say that when we believe that God is sovereign over all, we can say thank You for even the things we don’t want, because we recognize God has a plan in even them.

When her son came home from school in tears (again) at age twelve, being teased as a “retard” for having Down Syndrome, she taught him this lesson of saying, “thank You,” even for Down Syndrome, because God had a purpose in his life. She saw that purpose thirty years later when her son told a doctor what a “blessing” Down Syndrome was to him…and it changed the doctor!

When things are rough….

When we can’t change it all…

or when we can’t change even one thing…

Let us give thanks.

Make the list now. To what do we owe God “Thank You”?

“What if you woke up today with only the things for which you said thank You yesterday?” – Peter Bonner

I am thankful for you!

“In every thing give thanks: for this is the will of God in Christ Jesus concerning you.” – 1Thes 5:18

“But godliness with contentment is great gain.”  1Tim 6:6

24 thoughts on “Why is There a Dead Bird on the Air Hockey Table?”