Be kind, for everyone you meet is fighting a hard battle. – John Watson (aka Ian MacLaren)

My friend and pastor, Tom Ascol, was struck by lightning in 2008 and lived to tell about it. The aftermath was difficult to say the least. No visible signs were on his body, but on the inside, the electricity and its effects continued to surge. Unable to sleep due to the excess energy, he lay awake for days on end; even eating was a tremendous struggle. Noise and light were amplified to him at such a rate, he felt better alone in a house with lights out and shades pulled. Although his internal life was changed in a split-second flash, onlookers could simply see a man.

His family decided to go ahead with an already-planned vacation the next week, thinking that getting him out of town might give him more solitude. One problem: the Atlanta airport for the connecting-flight.

People raced in every direction, while my friend shuffled his feet, trying to make his body do what it used to do. Loudspeaker announcements made him wince; lights made him want to hide. His wife stood by him as they walked slowly.  She saw people huff and puff, so frustrated AT her husband that he wasn’t going the speed they seemed to think that he should.  No one could know what kind of life-threatening week he had had. No one could understand why he looked “normal” but acted differently. No one seemed to care.

Struggles and cockroaches have a lot in common:

–       For every one we see out in the open floor, there are hundreds hiding in the walls.

–       Everyone has a battle with them in their house (for cockroaches -at least south of the Mason Dixon; for struggles – everywhere), and no one likes to admit it.

I am not a fan of cockroaches. Go ahead, start a website, “CockroachesAgainstTerriBrady.com”. Fine by me. You can tell me they are harmless all you want, but they give me the creeps. I have seriously wondered why God would put such creatures on this earth with me.

But they served a purpose under heaven once, and I realized, once again, that my ways are not His ways and my thoughts are not His thoughts. (Is 55:8)

It began with a 27-yr-old friend of mine who was diagnosed with “terminal” stage-4 colon cancer. Doctors approximated 6 months of life for this beautiful, seemingly healthy young mother of two.  Diana never put a period where God had put a comma. She had surgery and then fought the fight, yet humbly submitted to God’s will throughout her struggle.

Our mutual friend, Sheri, let me in on a secret: Diana had never seen the Atlantic Ocean. Immediately, (January, 2010) we booked flights from Colorado for Diana to join Sheri and me at the Florida beach. The trip was amazingly blessed. We went from blood-sweating prayer, to tearful questions, to girlfriend laughs. Diana caught her first fish off of my dock, and a mother manatee and her twin babies surfaced to look at her as if she were Snow White. I was beginning to call her the “animal whisperer,” but apparently, she had that effect on cockroaches too!

We took the beach chairs out of the storage bags, and cockroaches jumped to the ground, scurrying every which way. My oldest son tried to bury them, and a seagull dived and caught one before our eyes. Yay! One cockroach down and a seagull was fed something besides my sandwich!

After the excitement seemed gone, Sheri, Diana and I lined up our chairs to watch the surf come to the sand in the waves’ motion. A pod of dolphins appeared in the distance – as if continuing Snow White’s show.

Suddenly, I felt that unmistakable crawling feeling: a three-inch cockroach was on my

leg!! He ascended my inner calf – making me scream like a hyena. It really is not like me, but I screeeeeeamed! I jumped up, trying to shake him off. The more I shook, the tighter the varmint held on. I began to run….in circles….around Sheri and Diana’s row of chairs, now forming words, “Get it off! Get it off! Get it off!”  while visions of it crawling up between my legs haunted my head.

I stopped in front of Sheri’s chair, and asked, “Is it gone?” pointing to the back of my leg where I couldn’t bear to look!

“Can you pleeeease get it OFF?!” I asked, fully expecting her to flick it to the ground.

Sheri shook her head no, and said with wrinkled eyebrows, “um…, water?” in a “duh!” kind of tone.  She shooed me with her hand, motioning for me to go into the January ocean.

I didn’t hesitate. I screamed my way to the ocean, and sat in the waves, watching my nemesis float away to be scooped up by a seagull.

That’s when I noticed. Diana was LAUGHING. She wasn’t giggling, or snickering; she was laughing. She grabbed her waist, which was still sore from surgery, but she couldn’t stop her body from hysterical laughter.  It was then that I noticed that the beach was not empty, but FULL of people in front of whom I had just made myself a complete FOOL! It made me laugh. Louder! The three of us got such a side-splitting, gut-wrenching laugh out of it that joy seemed to shower upon our threesome. For a moment, it took away the weight of the cancer, the prognosis, the battle, and the death sentence that loomed over our friend’s head and in each of our hearts.

Their mini-vacation lasted only 2 days, but it seemed like each hour, one of us would bring up the cockroach word, or the cockroach dance (La Cucaracha!) and we would begin laughing all over again.

When I dropped Diana at the airport, I wondered what God had planned for her. I wept at the pain of her struggle. I hate to see someone struggle! I see no earthly reason for them! I prayed in tears.

Days later, I got a text from Diana, “La cucaracha!!” and I laughed out loud. The “cockroach” word became our inside joke that fueled our ability to laugh during a horrible time.

Diana well surpassed the doctors’ 6-month prediction, but when July arrived, it became evident that her body was indeed shutting down as the cancer was winning the battle for her life, at age 28.

Knowing that she believed in Jesus Christ as her savior, she knew she would be going to heaven, so at one point she asked me to describe for her what heaven would be like. I told her all that I could remember (mostly from Isaiah 65 and Revelations 21):

–       No darkness of night, but no sun required, because God’s glory will light the whole thing!

–       More beautifully decorated with gold than could be described!

Texts became one-sided as I sent Bible verses and prayers in her direction, and got none in return due to her decline.

In September, she was told it looked like only weeks were left. My aunt died that month, so I flew to Colorado for her funeral, and I was able to stop in and see Diana.  From her feeble body, her inner strength still shined outwardly, when she said, “I don’t understand; but I trust Him.” (Proverbs 3:5) We prayed that she would be spared, and yet we wanted God’s will to be done. What a joy to pray with a believer!

In October, her husband texted me that hospice said they thought she was within hours of death.

I decided to text one last thing.

Then I stopped myself.  I was concerned that my humor would offend her husband, and it’s the last thing I would want to do. I erased the text and prayed.

After time, the thought wouldn’t leave my mind, so I followed through and texted her husband, “Whisper in her ear, ‘There are no cockroaches in heaven.’”

I got a text back from her husband which said that Diana had reacted to my words in a
full-face smile, the first response to anything they had seen in 4 days!  God had used the cockroaches!! What smiles they delivered – even in her last days on this earth.

Two days later, she went to live with her King Jesus forever, in her new body, with no more tears, no more pain, no more night, and I believe no more cockroaches.

Struggles are like cockroaches. Many times we have no earthly idea why they are here, but we can trust that God has heavenly ideas.

“Every circumstance that touches my life has first been filtered through His fingers of love.”- Nancy DeMoss

Struggles and cockroaches have a lot in common:

–       For every struggle we see in the open, there are probably hundreds more in private, so be kind.

May you trust Him with your struggles – the ones in the middle of the floor and the ones behind the walls:  the lightning strikes, the health problems, the marriage problems, the overbearing debt and the cockroaches. If He can use cockroaches to bring smiles to a dying woman, how much more can He do with you, His loving child, as He holds you throughout these days and into the bright, really, really bright skies ahead?! Keep holding on! 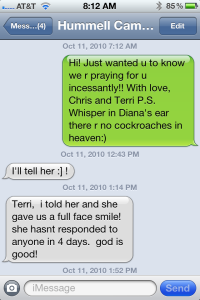 34 thoughts on “When We Don’t See A Purpose”