Potty Training toddlers was so fun! and not! all at the same time. I remember sticking strongly to a Bible verse: Romans 8:38 -“For I am persuaded that neither death nor life, nor angels nor principalities, nor powers, nor 2-yr-olds, nor tantrums (mine) nor wet pants, nor lateness, nor hidden surprises, nor embarrassing moments on the play place, nor things present (when they shouldn’t be), nor things to come, shall be able to separate me from the love of God.” (Or something like that.)

Somewhere near the second birthday seemed to be the logical time to stop changing diapers. It was time for potty-training! After all, my first child woke up one day (after we had read a couple potty-subject books) at the age of 2 and said, “I need to use the bathroom” and that was it! It was a piece of cake! Obviously I had this motherhood thing accomplished, and I could teach anything!

Then came my second child, and his second birthday. He didn’t quite read the book

with me, because he wouldn’t sit long enough to hear anything. He would run around the room, while I read aloud, hoping that if I kept reading, one day he would be interested and look at a book. He did! When he was about 5.

He never woke up and told me he needed to use the bathroom, so I started telling him.

I got Skittles, lots of them.

I set the timer for 20 minutes and walked him to the bathroom every 20 minutes.

At one point, he stood under the piano in my living room and excitedly said, “Hey Mom! It’s a good thing I have on waterproof shoes, because I just put #1 all over them!”

He just wasn’t getting it.

He wasn’t “behind” for his age. His motor skills were amazing. At 2 ½, he was in the pool and he asked to take his water wings off. My husband and I thought it was a good time for some swimming lessons, so we stood close to each other. My husband put him in the position to swim and aimed him at me, 3 feet away, ready to scoop him up as he choked, as most kids begin. Not him. He put his face down, swam toward me, but avoided my arms, going around me to get to the side of the pool. He reached his arm up onto the edge, then turned to his 5-year-old brother, and said, “Let’s race!”

But he preferred to go #1 in his pants.

He taught himself the “flippy dive” (He named it too.) He would stand on the edge of the pool, and do a front flip into the water, giggling the whole way. (Yes, I said age 2!) Once, when we were staying at a hotel, a man thought I wasn’t watching and the heroic stranger almost jumped in after him, thinking he needed to be saved, since he was so small. The man was surprised.

But the flippy-diver chose not to keep his pants dry. 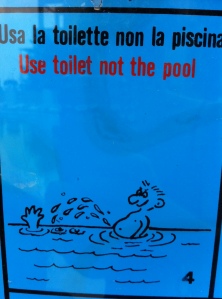 At three, he began riding a two-wheel bike. We lived at the end of a cul-de-sac, which joined another cul-de-sac for a great figure-8 racing track. He would spend hours racing with the 5 and 8-year-olds, going around that figure-8, so we quickly removed his training wheels, to the neighbor’s astonishment; but he did great! I remember enjoying watching him riding when I realized he hadn’t stopped to use the bathroom in while. When I made him stop for my examination, I found that not only was he wet, but he was chaffed all the way to his ankles because he had been wet for SO long. He had just kept racing. “Did you see me, Mom?!!”

But he wouldn’t use the toilet.

As he neared his fourth birthday, I had succumbed that the books were right. It had to be his choice, and I would never be able to change that…which was what made me think of “reverse psychology”. Moms can be creative!

I put some Cheerios in the toilet, and went to get him. I told him, “I bet you canNOT sink those Cheerios.”

Suddenly he wanted to use the toilet.

Done. No reward needed. He would come ask for Cheerios on his own, not to eat, but for target practice.

But what I didn’t see coming, was when he came to me hours later and said, “Mom, I bet you canNOT get me some ice cream!” 🙂

He learned my methods of reverse psychology much faster than he learned potty training! But I could have given him ten gallons of ice cream with cherries on top – because I was elated he kept his pants dry for a day almost two years into the project!!

Hang in there! I have never met a 16-yr-old who can do flippy dives, but not sink the cheerios. The light at the end is in sight; it might just be a long, wet tunnel.