“Yes!” excitement filled my insides when I recognized the early bird finishing his nightshift, as morning gilded the sky.

The day before, I had slept until 11am, wasting half of a day of vacation in this beautiful country.  I had felt like a grump all day: bothered by the heat, working at the hottest hours, one step behind my family of noisy kids all day.

The eleven-hour flight to Rome had had its “usual” challenges with four children along. Sleeping on a plane is generally difficult, but when children fight on both sides to use my legs as pillows, my elbowroom vanishes, and I am sequestered to a still position, attempting to leave their slumber undisturbed.  The price to be paid is jetlag. Some say jetlag is caused by the 6-hour time change; I have come to believe its cause is the 40-hour awake-shift that takes days for a body to reconcile.

No longer! NOW, the trip could begin! I was finally awake early enough to enjoy the cool morning with the cacophony of birds as I had my outdoor quiet time.

Scripture, prayer and foreign birdsongs began the morning.  The North Carolina cardinals were as far away as their song was different. A high-pitched squabble broke out high in the tree to the right; a rooster crowed in the distance behind me; a songbird joyfully welcomed the morning, while another sang loudly as if trying to use volume to make up for his lacking of variety in pitches. Melodies were woven together with a bass from the familiar coo of a dove.  The music screamed evidence of their Creator who wrote the score. 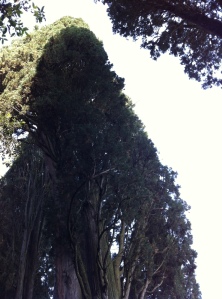 As I read amidst the surrounding orchestra, a familiar sound emerged from the woods.  “Cuckoo!” Subconsciously, it took me to my grandmother’s kitchen in Talladega, Alabama, where a plastic bird would emerge from the wooden clock on the wall every hour. “Cuckoo, cuckoo!” it sang as if purposefully pulling me to consciousness. I paused in my reading. “Cuckoo!” it came from my left now.  What a gift the morning has been! The church bell in the distance gonged seven times.

I recognized the answered prayer: that I would awake early enough to be peaceful before the Brady bunch arose.  It has been a secret to sanity for all of motherhood. I used to joke to myself, “I have to rise early enough to beat the children up.” (The semantics make me laugh every time.)  Many mornings, the wakeup call was, well, alarming -as a 5:30am alarm clock in an attempt to “beat up” a baby who seemed to keep waking earlier each day. But buzzing alarm clock memories made the nudging of a whippoorwill more beautiful in contrast, even though both brought blessings.

Years ago in a Bible study with girlfriends at college, one of them had shared that her first prayer of the day was, “Thank You, God, for waking me.”

I remember my own usual reaction to mornings at the time: “Really? That’s all the sleep I get?! Ugh!” and that young lady’s prayer changed me. I don’t even remember her name, but I have thought of her countless mornings when I have had to fix my thinking to, “Thank You, God, for waking me.”

Great is Thy faithfulness. Morning by morning, new mercies I see. Help me, Lord, to take time to recognize Your gifts, even in a whippoorwill.

And thanks for waking me.

(Photo in heading: grapes and flowers which adorn a canopy above our dining area. Photo in side bar: cypress pines which line the driveway to the villa where we are staying.)